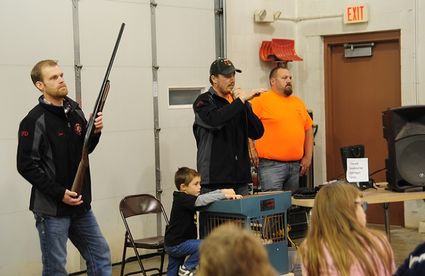 From left: Sunburg Fire Department members Todd Rudningen, Matt Anderson and Darin Pierce as they auction off a gun at the Ham/Turkey bingo and Dale Hagen family benefit.

Each spring and fall, the Sunburg fire fighters hold ham and turkey bingo to raise funds for their department. This fall, one of their own passed away after a courageous battle with cancer.

Dale Hagen, a 25-year member of the department, died on October 15 after fighting cancer since February 2016. His wife, Andrea, and their son, Darin, along with many other members of the Hagen family were joined by hundreds of supporters from throughout the area on Saturday, November 18 at Sunburg's fire hall.

At least 450 attended the event. Guns, a quilt and cash were also raffled off along with 24 hams and turkeys. Read more and see a full spread of photos in the November 23 issue of the Bonanza Valley Voice newspaper.

(HD video) A quilt and gun are auctioned off during the Sunburg ham and turkey bingo on November 18.