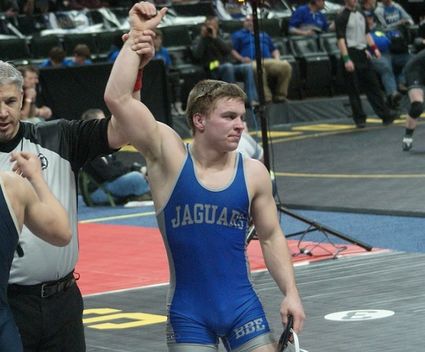 Adam Jaeger shown with his arm raised after winning in the state quarterfinals on March 2 in St. Paul.

For the first time in school history, the Belgrade-Brooten-Elrosa Jaguars wrestling team will have four team members competing in the Class 1A state tournament semifinals. The Jaguars went 4-0 in the state quarterfinals tonight (Friday, March 2) at the Xcel Energy Center in St. Paul!

A variety of reasons and factors go into building a student-athlete up to the point where they can not only compete at the biggest stage of a high school wrestler's career - but also win! For B-B-E's four wrestlers who competed in the state quarterfinals, the spark that eighth-grader Blaine Fischer found late in the third period of regulation in his match and then in the opening seconds of the overtime period likely provided some extra motivation and even adrenaline for his three teammates who followed him on the mats at Xcel.

Head coach Jack Mueller said about the first state quarterfinal match for his Jaguars, "Blaine went out and got it. He battled all the way through three very tough periods and tied it at the last second. He didn't freeze up in the overtime period. Once the whistle blew, he went after his guy. He did not hesitate for a second. It was all heart out there."

At 113 pounds, Fischer was responsible for one of the second round's biggest upsets of the night when he won a 6-4 sudden-victory overtime decision over No. 9-ranked and sophomore Marshall Michienzi (41-9) of Deer River. It was an incredible win! Fischer was losing 4-2 in the final seconds of the the third period before slipping through for a reversal with just two seconds left. He takes a 40-13 record into the semifinals, which begin at 10:15 a.m. tomorrow (Saturday) at the X. Fischer faces sophomore Trevor Janssen (37-5) of Blackduck/Cass Lake-Bena for the right to compete in the state championship.

At 120 pounds, sophomore Canon Swanson won by fall with a time of just 1:18 against Royalton/Upsala's eighth-grader Jacob Leibold (30-15). Swanson takes a 46-2 record into the semifinals, when he will face junior Jackson Hale (33-3) of Grand Meadow/Leroy-Ostrander/Southland.

Finally, at 152 pounds, senior Adam Jaeger became the fourth Jaguar to earn a 2-0 record on the opening day when he won a 9-3 decision over senior Adam Rients (33-10) of Waterville-Elysian-Morristown/Janesville-Waldorf-Pemberton. Jaeger takes a 32-0 record into tomorrow's semifinals, where he will square off with Goodhue's senior Mason Huemann (38-5).

(VIDEO) The end of the 113-pound match for Blaine Fischer is featured in this video.

The Class 1A state semifinals begin at approximately 10:15 a.m. at the Xcel Energy Center on Saturday, March 3. Winners of the semifinals advance to their respective championship matche, with that round starting at approximately 6 p.m. Losers of semifinal matches will have to battle back from the consolation semifinals in order to get a spot in the fifth- or third-place matches, which start at 4 p.m. on Saturday.

That's all for now! Thank you for supporting our B-B-E Jaguar wrestlers!! They sure brought the thunder and lightning tonight!

NOTE: you can catch additional video and coverage from state at the newspaper's Jaguars Sports blog...here's the direct link to state quarterfinal coverage: http://bbejaguars.blogspot.com/2018/03/state-quarterfinals.html.