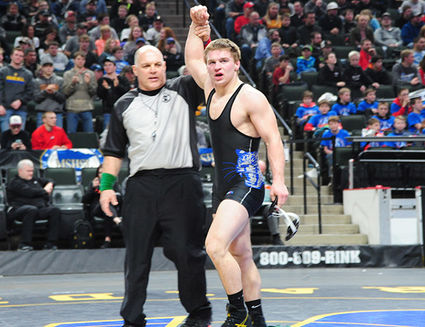 On March 3 in St. Paul, Adam Jaeger became the first Jaguar wrestler since 1989 to win a state title. He is shown as the victor at 152 pounds.

A 29-year drought at Belgrade-Brooten-Elrosa ended on March 3 when senior Adam Jaeger earned a takedown in the closing seconds of the third period to win a 3-1 decision and claim the 152-pound Class 1A state wrestling title. Jaeger, who finished a perfect 34-0 this season, defeated senior Jacob Tvinnereim (48-6) of Jackson County Central. This is B-B-E's first wrestling state title since 1989, when Brendan Bogart won a state title in our first year as a paired program under the Jaguars banner.

Also competing in the state finals was sophomore Canon Swanson, who lost a 4-0 decision to finish with a silver medal in the 120-pound division and a 47-3 overall record this season. He trailed 1-0 going into the final minute of the third period.

Read more on the Jaguars at the state tournament in the March 8 issue of the Bonanza Valley Voice newspaper.