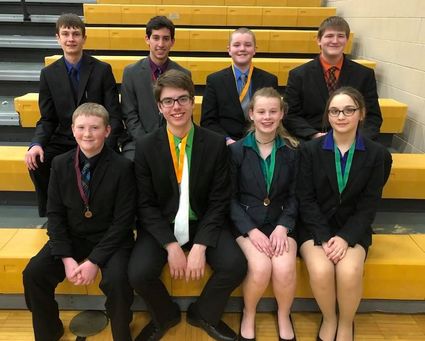 Eight team members of the B-B-E speech team will compete at the Section 5A meet.

The Belgrade-Brooten-Elrosa speech team had a marvelous night at the Sub-Section 5A-South speech meet at New London-Spicer high school on Thursday, April 5. Out of 13 categories, and a total of 16 speechers competing, B-B-E advanced eight to the Section 5A, state-qualifying meet that will be held next Saturday, April 14 at Albany.

In the final team standings, Eden Valley-Watkins repeated as sub-section champions. Annandale was runner-up, and New London-Spicer took third place. The sub-section has a total of seven teams.

A long video of the awards ceremony is posted below.