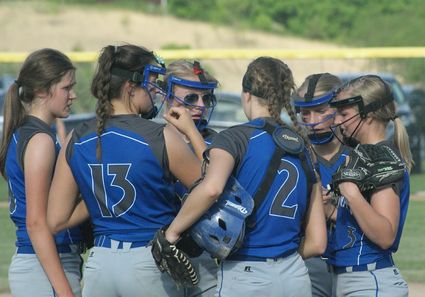 The infield players gather between innings in the Ortonville playoff win.

For the first time since 2008, the Belgrade-Brooten-Elrosa Jaguars fastpitch team has extended their season into the second week of the postseason while being one of the last six teams standing in Section 6A. Check out video below from the bottom of the seventh inning that kept their season going.

(HD video) The late-game heroics are shown in the bottom of the seventh inning against Ortonville on May 24.

Last Thursday at Minnewaska, the Jaguars battled all game with top-seeded West Central Area (19-4) but came up short in a 7-3 loss in the Sub-Section 6A-South semifinals. They kept the season alive with a 5-4 walk-off win over Ortonville (5-15) in the elimination bracket that night.

Now 7-15 overall, the Jaguars face Browerville (14-7) in the elimination bracket on Tuesday, May 29 at Minnewaska with a 4 p.m. start. Two wins on Tuesday puts them in the Top Three of Section 6A, and from there the section finals are held on Thursday, May 31, also at Minnewaska.