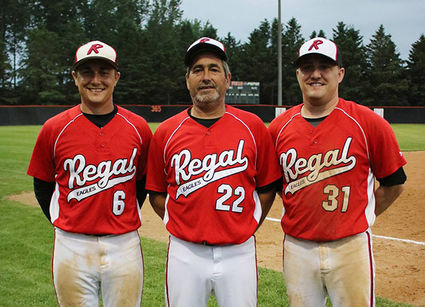 After they clinched the Elrosa Elite 8 tournament championship on Sunday night, the father / son(s) pairs on the Regal Eagles team took turns for photos with Cheryl Kampsen. It goes without saying that a Regal team would not be complete without Beiers on the roster! From left: Josh Beier, Joe Beier, Josh Beier.

The Regal Eagles amateur baseball team is repeat champions of the second annual Elrosa Elite 8 tournament. The Eagles achieved the feat after pulling off a 4-3 win over the host Saints in the title game on Sunday, July 17.

Regal opened the tournament with a narrow 6-5 win over Clinton on Friday night. The Saints finished the night with a 12-2 win in six innings with Aaron Vogt pitching a complete game.

On Saturday, Regal's semifinal game with Bemidji was rained and stormed out, postponing it to Sunday morning. Elrosa managed to get their game in with the minimum innings (five) while beating Sartell by a 1-0 score to set up the Saints-vs.-Eagles championship contest.

Sartell beat Bemidji 4-2 for third place, Buffalo beat Hutchinson 14-13 in eight innings for fifth place, and the seventh-place game between Clinton and Lamberton was rained out.