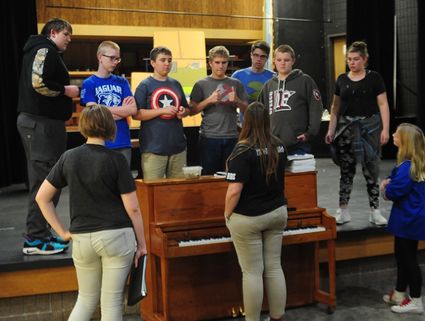 Students gather to warm up their singing voices at musical practice on October 5, 2018.

The Belgrade-Brooten-Elrosa theater department will hold the fall musical "Big" this weekend: November 16, 17, 18 are the show dates. The Friday and Saturday show times are 7 p.m., and on Sunday they will perform at 2 p.m. The production will be held at the high school auditorium.

Admission prices are $7 for adults, $4 for students in grades K-12, and preschool-aged children or younger are free if accompanied by an adult.

From Wikipedia: "Big" The Musical is a 1996 musical adaptation of the 1988 film starring Tom Hanks. It was directed by Mike Ockrent and featured music by David Shire and lyrics by Richard Maltby, Jr., with choreography by Susan Stroman. It involves Josh Baskin, a 12-year-old boy who grows up overnight after being granted a wish by a Zoltar Speaks machine at a carnival. With the aid of his best friend, Billy, he must cope with his new adulthood while finding the machine so that he can wish himself back and more.

Further information is forthcoming via the web and in print!