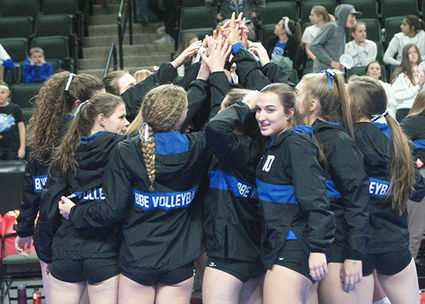 The Jaguars are shown huddling up on Court 1 of Xcel Energy Center during the state tournament.

The 10th-ranked Belgrade-Brooten-Elrosa Jaguars volleyball team brought home a Final Four state trophy after earning a quarterfinal win in the Class 1A state tournament held on November 8, 9 and 10 at Xcel Energy Center in St. Paul.

After sweeping New Life Academy of Woodbury 3-0 on Thursday, the No. 3-seeded Jaguars suffered a 3-1 loss to Medford in the state semifinals. The stat sheet read in almost identical fashion between the Jaguars and Tigers in all but one category. Medford hit 20.9 percent, and B-B-E hit 19.3 percent. Both teams had one solo block each, and Medford had four block assists to eight by B-B-E. The Jaguars had 60 kills to 49 by the Tigers. The digs totals: Medford 77, B-B-E 78.

(HD video) The Jaguars pull away from New Life Academy in the third set of their Class 1A state quarterfinal match on November 8 in St. Paul.

New Life Academy finished 19-12, while Medford finished their dream season in the state finals with a 3-0 loss to Minneota; their final record was 29-6.

Minneota was on some kind of mission this year after storming their way to the state title match a year ago where they were drubbed by Mayer Lutheran (25-19, 25-16, 25-13) to take second. The Vikings placed third at the state tournament in 2013, but from 2014 to 2015 they fell in the Sub-Section 3A-North tournament. In 2016, they lost to Tracy-Milroy-Balaton in the Section 3A finals. Overall, Minneota was in their 12th state tournament this year while winning their second state title and finishing 36-1 overall. They finished 30-0 in 2006 for their first state title.

In their final match of state, the Jaguars lost 3-0 to Ada-Borup to finish fourth out of 193 Class 1A teams in the state.

Cumulative season stats and coach's comments will follow in a future issue.