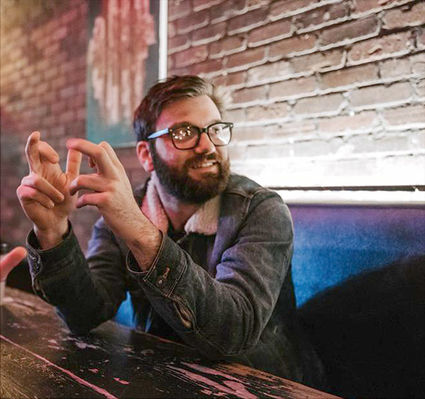 Come to Goat Ridge Brewing Co. in New London during December and take in some terrific live music while you and your family celebrate Christmas and the Holidays at a local level!

Friday, December 7: Nick Costa will be performing from 8 p.m. to 10 p.m .; he is a singer/songwriter from Minnesota's Twin Cities. He is commonly known as the guitarist of the rock and roll powerhouse http://4otf.com/. Previously the frontman of local staples The Person & The People, as well as a previous project under the moniker of Me As A Pilot, Nick has decided to embark on his own journey under his own name. He recently released a live album titled Live At The Warming House, which features songs from his previous bands, as well as songs from future solo albums. See more about him at his website: http://nickcostaisrad.angelfire.com.

Saturday, December 8: The next night is a Crankshaft Final Show night, when a dear friend to Goat Ridge Brewing, Alex Crankshaft Larson, will be retiring from pork neck boogie. Come town on Saturday (December 8) for your last chance to get down and wish him well! The fun starts at 8 p.m.

A little about Larson from his website's bio: "Born into this world from gas station cassette tape collecting semi-truck drivers, Alex "Crankshaft" Larson was introduced to a wide variety of music as a pup. In 1996 he traded a combination oil/wood stove to his uncle for his first electric guitar and amp. Since then he's been involved in many projects, including a band he started with his brother in 2001 called The Mojo Spleens. In April 2008, while self-employed as a contractor, he started practicing as a one-man band and was playing shows two months later. Larson self-produced and released two EPs and one album during the next three years. In 2010 Crankshaft decided to hang up his hammer so he could focus on writing and performing music. Since then he's been earning a living playing, as both a traditional one-man band and as the leader of his trio, Crankshaft and the Gear Grinders."

As always, read up on their other events and learn more about Goat Ridge Brewing Co. at their website: https://www.goatridgebrewing.com.