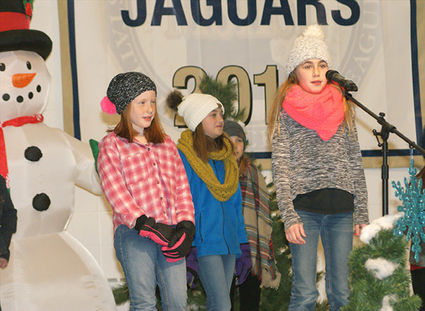 Jacinta Jackson sings her solo part during the opening song of the K-4 musical. She was one of 12 students who sang solos.

Belgrade-Brooten-Elrosa elementary school was host to a splendid Christmas "mini-concert" as well as a marvelous Holiday-themed musical on Wednesday, December 12. Students in the sixth grade band performed three songs to start off the program: “Jolly Old Saint Nicholas”, “The Dreidel Song” and “Jingle Bells”.

The band was followed by students from the fifth and sixth grades in the elementary choir who sang two songs: "Santa Claus is Coming To Town" and "Oh Come, All Ye Faithful".

Following that, students in Kindergarten through fourth grade performed a Christmas musical called "On With The Snow" directed by music teacher Diana Gertken.

Below, you can watch the entire program in HD video. (You may have to scroll up at this point if you are viewing on a SmartPhone.)