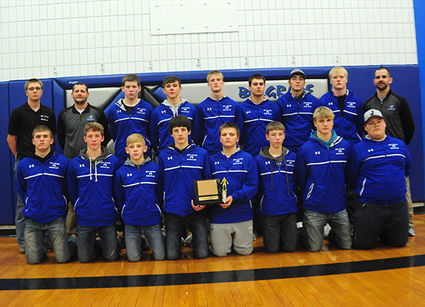 The Jaguars are shown with their first-place trophy in the season-opening Early Invite on the home mats back in November.

For the third year in a row, the No. 8-ranked Belgrade-Brooten-Elrosa Jaguars wrestling team has advanced to the Section 5A Final Four round. They did so by defeating No. 5-seeded Kerkhoven-Murdock-Sunburg 46-19 in the section quarterfinals on Wednesday, February 13. The Fighting Saints finish the team portion of the season with a 10-7 mark, while the Jaguars advance with a 10-6 record.

(VIDEO) Shown is Dylan Kampsen earning his win at 160 pounds in the section quarterfinals on February 13.

Next for the No. 4-seeded Jaguars is a battle with top-seeded and No. 1-ranked (Guillotine) Long Prairie-Grey Eagle/Browerville (22-1) at 6 p.m. on Friday, February 15 in Benson. The LP-GE/Browerville Wolves advanced to the semifinals with a 72-3 win over No. 9-seeded Quad County in the quarterfinals.

The Jaguars faced the Wolves earlier in the season on January 25 in Browerville. That dual went the way of LP-GE/Browerville by a 39-26 score.

In their playoff opener with K-M-S, the Jaguars trailed 7-3 after three matches were complete, but from that point they poured it on with 31 unanswered points between the 126-pound match and the 160-pound match.

B-B-E will be gunning for the fifth section finals trip in school history. They last battled in a state-qualifying dual in 2017, when K-M-S beat them 43-23.