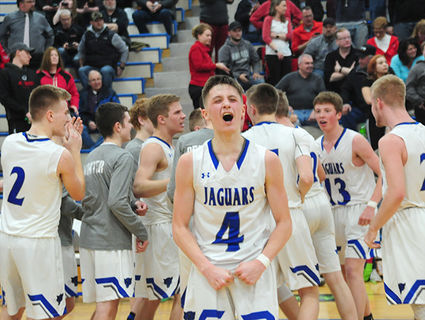 Senior guard Abe Peter (4) reacts with joy along with the rest of his teammates after the Jaguars won the sub-section crown on March 13 at Foley.

The Region 6A coordinators have selected the Crosby-Ironton high school as the location for the Section 5A boys' basketball championship game. Tip-off between the No. 2-seeded Belgrade-Brooten-Elrosa Jaguars out of the south half and the No. 1-seeded Cromwell-Wright Cardinals out of the north half will be at 7 p.m. on Friday, March 15. To catch up on the current playoff run by the Jaguars, visit the Jaguars Sports blog: http://bbejaguars.blogspot.com.

The B-B-E Jaguars have won their first sub-section title since 2014. They did so with a 59-56 win over defending champion Hinckley-Finlayson on March 13 in Foley.

In B-B-E history, the boys' basketball team has now played in a sub-section championship game in 15 seasons (half the time in the program, which was founded in 1988-1989). In those 15 trips to the sub-section finals, the Jaguars now have a record of 8-7.