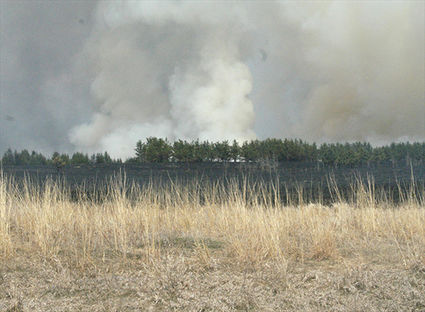 A view of the northern section of the grass fire on April 20, 2019 in rural Terrace.

The fire departments of Brooten, Glenwood, Sedan and Sunburg responded to a large grass fire in eastern Pope County on Saturday afternoon, April 20.

At approximately 15:00, the sirens were blaring in Brooten as the fire department sent rigs to a fire located between one and two miles east of the town of Terrace. At one point, a cropland irrigator pivot was started on a field located on the eastern edge of the fire.

By 18:00, the Brooten fire department rigs were seen back in the shop getting cleaned and parked. It was an exhausting fire to battle, as the weather suddenly hit warm temperatures during the cooler spring that the Bonanza Valley area has been experiencing. The day time high approached 80 degrees after it has barely surpassed 60 degrees previously this spring.