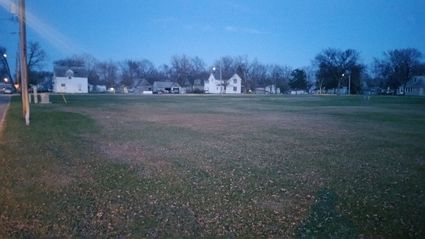 A view of the open city lots in the center of town. From 1898 to 1994, school buildings occupied this lot.

Brooten may soon have a senior and / or community housing project underway as soon as this coming fall.

Developer Cody Nelson recently told city hall that he is still interested in developing empty city lots into apartment or duplex-style housing. Nelson approached the city with a plan in the spring of 2018.

City clerk Jeanne Kinne explained, "If the council is interested, Cody is ready to put a plan in motion. He was at the city lots (at the former Brooten high school site) today and took some measurements."

Nelson was not sure how many units could be built on the open lots, but Kinne gave him the ordinance on set backs, and he will get back to the city as soon as possible with a formal proposal.

Additional information was published in a front-page article of the April 25 issue of the Bonanza Valley Voice newspaper.