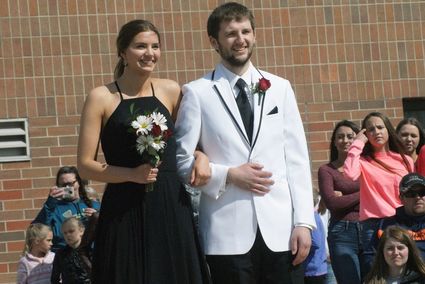 Nicole Wesbur and Trevor Hubert pause for photographs during the grand march processional at B-B-E on April 27, 2019.

A truly magnificent setting was a big part of Belgrade-Brooten-Elrosa's 30th annual Prom Grand March on Saturday, April 27. With a slight amount of cloud cover, not a hint of wind and seasonable temperatures around 60 degrees, the grand march featured no fewer than 61 couples - the most in many years for B-B-E.

A full slate of photos from the grand march appeared in the May 2 issue of the Bonanza Valley Voice newspaper. Another round of prom pictures will be published in the May 9 issue. Below, watch video from over 35 minutes of the grand march. Also, you can click on the following link (short link) to view the Bonanza Valley Voice online photo gallery: https://bit.ly/2VJRomb. (Note: all photos will be uploaded on May 7.)