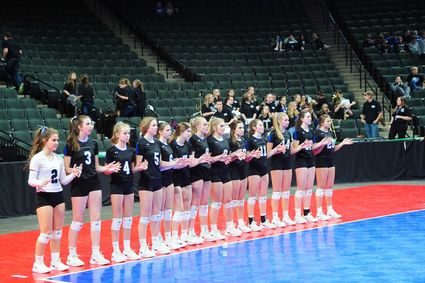 The B-B-E Jaguars line up for player introductions prior to the start of the 2018 Class 1A quarterfinal match at Xcel Energy Center on November 8, 2018.

FASTS FACTS for the upcoming state volleyball tournament, with the schedule as follows at the Xcel Energy Center in St. Paul.

All quarterfinals will be played on Thursday, November 7. Class AAA matches are scheduled for 9 a.m. and 11 a.m. and Class A will follow at 1 p.m. and 3 p.m. Class AA teams will compete at 5 p.m. and 7 p.m. Detailed Class 1A quarterfinal match-ups can be viewed below. Championship and consolation semifinals in all classes are on Friday, Nov. 8 with the consolation final, third-place and championship matches scheduled for Saturday, Nov. 9. For a complete schedule, see the Minnesota State High School League's website at http://www.mshsl.org.

Internet streaming: School Space Media will livestream all championship matches, starting with the quarterfinals. There is no charge for viewing. Find the stream at http://www.prepspotlight.tv.

Social media: fans can follow the tournament on the League's Facebook page and on Twitter at @MSHSL and @MSHSLJohn. For B-B-E Jaguar fans, results will be posted right away at the Jaguars Sports blog after each state tournament match. Random updates will be posted as often as possible during each state match: http://bbejaguars.blogspot.com. The Bonanza Valley Voice newspaper's Twitter page will have additional posts as frequently as possible along with web article links and more each day: @bonanzavalley.

The quarterfinal match ups in Class 1A are as follows:

No. 1 Seed Minneota (30-3) vs. Greenway, Coleraine (26-4), 1 p.m. – The defending champions from Minneota return for their third consecutive appearance and 13th overall. The Vikings are in the hunt for their third title. In addition to last year, they also won in 2006. Greenway returns for the first time since 2001. This is the fifth appearance for the Raiders, who won one previous championship in 1985.

(HD VIDEO) Here's a short (choppy) video clip from the end of game two in the Section 5A finals on Saturday, November 2 in Little Falls.