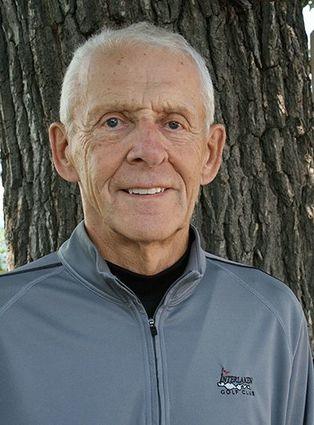 Attending a small high school like Brooten gave Sherwood Sagedahl an opportunity to play four varsity sports – football, basketball, baseball and track & field. He remembers having a goal to "letter" in all four sports in one school year so he could get the "B" and the sport pins. He reached that goal his senior year!

In football Sherwood played end defensively and offensively on the Bucs Nine-Man team. A highlight in his senior year was winning the Homecoming game over Boyd 33-0.

Another highlight for Sherwood in his senior year was being on the boys' basketball team which excited the Brooten community by compiling a 19 win 3 loss season with two of those losses to St. Cloud Tech and Willmar. Buc fans thought this was the year to beat perennial state power Willmar in district play, but that didn't happen. However, the 1956-57 team had the best win-loss record in Brooten H.S. history. Head coach Jim Walters was quoted in 1957, that Sherwood's major contribution to the team was his defense – eight steals per game.

Baseball was another favorite sport where he either pitched or played shortstop from grades 10-12. His senior year the team only played seven games and he pitched three of those games. He gave up 5 hits and 3 runs in 20 innings. His record: 2 wins and 1 loss. That loss, 2-0, was to arch rival the Belgrade Redmen! A baseball highlight was in the summer of 1957, when he played shortstop for the Brooten Town Team which won the Corn Belt League Championship.

Practices for all sports, except track, were immediately after school. Track and field practice was during lunch time – eat and then run. Practices were not held regularly, and they were light – run around two blocks. Sherwood only remembers doing the 880-yard Run in competition. His best time in 1957, was around 2 minutes 15 seconds good for fourth place in the District 20 meet. Little did he know that he would have more success doing track meets in retirement than he did in high school.

After spending two years, 1957-59, of active duty in the US Army, Sherwood graduated in 1964 from Moorhead State U, Moorhead, MN. There he played basketball for one year and baseball for two years. He didn't have much playing time, but enjoyed the experience which he thought he needed if he wanted to coach high school basketball and baseball.

Sherwood taught and coached basketball and baseball at Kimball high school from 1964 to 1966.

After graduating from St. Cloud State in 1967, with a degree in secondary high school counseling, he was hired by Fairmont High School. Fairmont, MN. He and his wife Carol raised three children: Laurie, Stacey and Joel, in Fairmont. All three of their kids graduated from St. Olaf College. They and their spouses and their four grandkids live in the twin cities.

At Fairmont Sherwood was the assistant to the head coach for most of the 20+ years he coached boys' basketball. During those years Fairmont had some good teams while winning nine South Central Conference titles and reaching section play seven times. The girls' tennis team won two conference titles during the three years he was the head girls' tennis coach. He also co-founded the I-90 Basketball Camp, Fairmont, which is still operating.

After retiring in 1997, Sherwood and Carol did some traveling abroad and wintered in Arizona. They now spend five months in the Phoenix area. It was a life-changer for Sherwood.

In retirement at age 60, when his kids encouraged him to do road races. He first started running 5Ks (3.1 miles) and in a few years did state senior track & field meets. In 2005, he entered his first National Senior Games Meet (U of Pittsburgh) and then in a few years did USA T&F Master National Meets. He has done track meets at Arizona State U, U of Pittsburgh, U of Louisville, Stanford U, Wake Forest U and in other large cities including the Twin Cities this year. It has been fun, challenging and rewarding for him.