A game that Jaguar Country will remember for years 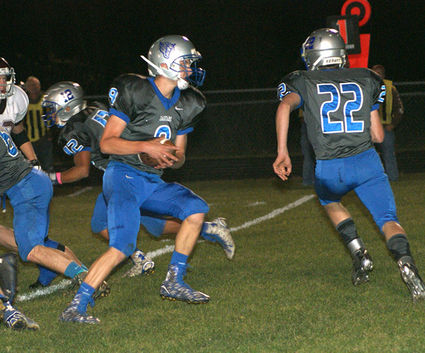 Quarterback Ryan Illies shown running the option against LP/HT as Kyle Felling (22) sweeps right. The two sophomores connected for the game-winning 10-yard touchdown pass on B-B-E's final play of the game with just 4.4 seconds on the clock.

It was not a game for the faint of heart.

Trailing 19-7 in the third quarter, the Belgrade-Brooten-Elrosa Jaguars football team had their work cut out for themselves against a surging Lester Prairie/Holy Trinity team on October 14 in the Section 4A playoff opener.

For most of the game to that point, with seven minutes on the clock, the Jaguars were hamstrung offensively. It continued to the next series, when they went three-and-out, miffed a punt and gave the Bulldogs the ball on the B-B-E 15-yard line.

Instead of folding and letting LP/HT make it a three-score game, the Jaguars dug in and held the Bulldogs on downs. The offense struggled through one more punt, and with 8:42 left the Jaguars scored to cut it to five points.

Two series later, the Jaguars drove 42 yards in the final 34 seconds before scoring on a thrilling 10-yard catch by Kyle Felling to put the Jaguars ahead 20-19. The two-point conversion was successful, and the Jaguars defense held on one final LP/HT play to give them an improbable 22-19 win.

Video footage from the final minute of the playoff opener, plus post-game footage after the historic win.

As the fourth seed, the Jaguars traveled to Minneapolis North high school on Tuesday for the semifinal round. The top-seeded North Polars won 48-10 and face third-seeded Mayer Lutheran in the section final this Saturday in Collegeville.

To see all the details of the football team's playoff opener, refer to the print edition of the Oct. 22 issue of the Bonanza Valley Voice. Video of Felling's catch at the end of the game is shown at right.