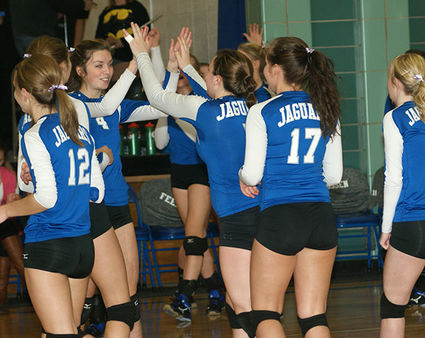 A shocking end crushed the hearts of Belgrade-Brooten-Elrosa players and fans alike on Saturday night when the Browerville/Eagle Valley Tigers throttled the Jaguars in a 3-1 sub-section semifinal win at Long Prairie.

After B-B-E won continuous sub-section semifinal matches in Class 2A from 2002 to 2006 and then in Class 1A from 2007 to 2013, they have now lost two straight in that stage of the playoffs and have gone 1-1 in the postseason two years in a row.

The season's end came without warning, as the Jaguars had been playing their best volleyball of the entire season as October passed by. Marquee wins in the conference where they went 7-0, a great showing at the Alexandria tournament and then a 3-0 win over Granite Ridge Conference co-champion and Sub-Section 6AA-North finalist Albany suggested the Jaguars were poised for a deep playoff run.

Instead, what happened was a close repeat of the 2014 playoffs when upstart Verndale swept the Jaguars out of the playoffs in the same location (LP-GE high school).

The B/EV Tigers (22-3-2) had just one loss to speak of from the start of the season through October 9, that being a 3-0 sweep by B-B-E on September 14. They'll now face Verndale in the Sub-Section 5A-West finals for the second straight year. Last year in the finals, the Tigers won 3-2 over the Pirates with a 15-7 win in game five. B/EV eventually won the Section 5A title and went 1-2 at the Class 1A state tournament (sixth place).

The Jaguars finish the year 20-10 overall.

To read more about the playoff matches, be sure to subscribe to the Bonanza Valley Voice.