Benefit for Dawn Glesne Larson is December 12 in New London 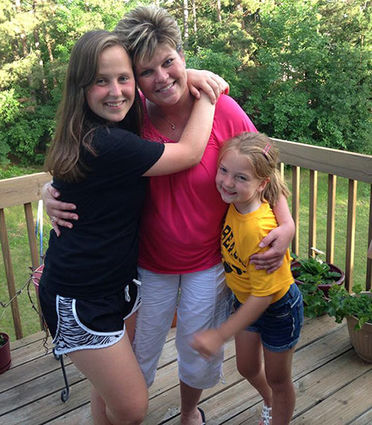 The life of Dawn (Glesne) Larson changed in an instant in a motorcycle accident on July 24 on Highway 10 near Royalton.

The motorcycle, driven by 43-year old Thomas Knott of Royalton, crashed into the ditch. Knott left Larson in the ditch and put the motorcycle back on the highway. Besides the problem of leaving Larson behind, he was traveling north in the southbound lanes, according to a Minnesota State Patrol report.

Knott, meanwhile, was pulled over by a State Trooper in Royalton seven miles from the accident scene after he made his way into the correct lane. He was reportedly driving the motorcycle with no shoes, helmet or eye protection. Men's shoes were recovered at the accident scene.

State Patrol Lt. Tiffani Nielson said, "The abandoned passenger was found 45 minutes after the crash Friday night by Good Samaritan. She had severe injuries and was immediately taken to the St. Cloud Hospital and hospitalized."

Larson, 42, grew up in Osakis and is an Osakis high school graduate. She lives in Rice with her daughters.

Larson's mother is LaVonne (Kosse) Tonn of Sartell. Tonn grew up near Jericho in the Norway Lake area.

A chicken dinner and auction benefit will be held on Saturday, December 12 from 11 a.m. to 3 p.m. at the New London American Legion. The Larson and Glesne families would appreciate any donation you are able to give to help. She has been unable to work because of the accident, which happened just three days before she was going to begin at a new job. It is unknown when she can return to work.

Currently she is able to walk on her own power and has undergone more surgeries. In an August interview with Channel 5 Eyewitness News, Larson said, "I feel like I could've died and that there's a reason why God gave me a second chance to live."