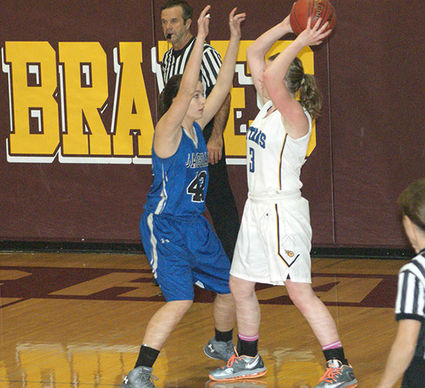 The Belgrade-Brooten-Elrosa Jaguars girls' basketball team has started the season 4-0 for the first time since the 1996-1997 season.

After picking up two wins in Benson to claim the championship of the Case IH tournament last weekend, the Jaguars pummelled visiting Upsala on Tuesday this week 71-37 for their fourth win.

Making the initial undefeated streak even more impressive is the fact that all 14 players on the varsity roster saw action in all four blowout wins.

In Benson, the Jaguars defeated the host Benson Braves 69-34 in a semifinal game. In the finals, the Jaguars beat Norman County East/Ulen-Hitterdal 75-49 to avenge a loss in last year's championship to the Titans.

After the win in the finals, Ashley Trustheim said in her post-game comments on Smooth Magic 107 FM radio, "We've been playing pretty good defense so far to start the year. Coach Anderson tells us to keep hustling, and good things will happen."

(Video) From the Case IH tournament championship game in Benson on December 5.

Morgan Gronli, who earned the KMGK Radio Player of the Game award, said, "At halftime the coaches told us we had to box out better, and also to focus on the little things to improve our game."

Head Coach Kristina Anderson commented in her post-game radio interview, "While it has been ragged at times this early in the season, we are seeing good things with our press. We've stuck to it, and you could tell our pressure got to them (NCE/UH) in the second half. We're deep, and we can run and hustle and make it happen on both ends of the court."

After a home game against Upsala on Tuesday this week, the Jaguars travel to Pierz on Thursday this week for the Central Minnesota Conference opener. Next Monday they host Parkers Prairie (no JV game), and next Tuesday they have the second CMC game of the season with a game at Paynesville Area.

To read all about the Jaguars, pick up a copy of the Bonanza Valley Voice newspaper.