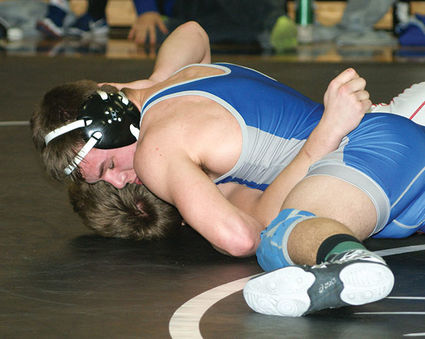 While Kerkhoven-Murdock-Sunburg ran away with the title with 183 team points, a bottleneck occurred between second and fifth place. With 119.5 points, the Jaguars missed third place by just five team points. What hurt them the most was only having three wrestlers getting into championship matches. Overall, the Jaguars had four wrestlers take third place, none at second place and one take fourth place. They had open weights at 126 and 132 pounds.

One other highlight to the afternoon for B-B-E was having senior Colby Schramel earn his 100th varsity win. Competing in the 152-pound division, Schramel beat Minneota's Tanner Sik by fall (3:31) in the tournament quarterfinals for win number 100. He has been on the varsity team since his eighth grade, the 2011-12 season.

(Video) Joe Reller shown battling in his overtime win for third place at 220 pounds on January 2.

Head coach Jack Mueller had this to say about Schramel while having first-hand experience coaching him last year and now this season, "Colby Schramel works as hard as anyone. As a coach, there is nothing more rewarding that seeing hard work pay off. Colby's hard work is clearly paying off, and it is exciting to watch. Colby has dedicated himself to the weight room. He is pound for pound one of the strongest kids I have ever coached. In addition to his success in the weight room, his willingness to wrestle all summer long has earned him the title of captain for the second year in a row. Colby is an extremely coach-able wrestler. He is not afraid to take something from the practice room and try it in competition. He is constantly watching film and looking for ways to improve. All that aside; his caring attitude and humble personality are his greatest attributes. He is truly a GREAT kid. I know that Colby is proud of achieving the 100 win milestone, but he is now on a mission for win 125 and a spot on the podium at the state tournament."

Next for the wrestling team is the eight-team Paynesville tournament on Friday at 4 p.m. Other teams with the Jaguars and Bulldogs include Barnesville, Holdingford, Litchfield, Morris Area/Hancock/Chokio-Alberta, Sartell-St. Stephen and Eden Valley-Watkins.

A big night is in store for the Jaguars next Tuesday, Jan. 12, when Howard Lake-Waverly-Winsted and Pierz come to town (high school) for a Central Minnesota Conference triangular. Pierz (6-4 overall, 0-0 CMC) is the defending CMC champion and considered the team to beat this season. B-B-E is 3-0 in the CMC with three matches remaining; last year they took second place with a 5-1 record.