Andy Tensen has many hats, but most of all he is grandpa 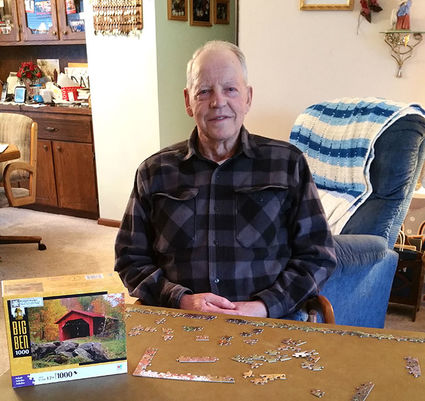 Andy Tensen served in the U.S. Army during the Korean War and is the present Commander of the Brooten American Legion. A soft-spoken and humble man, Tensen is happy visiting with anyone he meets on the street or simply hunkered down at home with a good, challening puzzle.

Andy Tensen is a United States Army veteran, a retired farmer and a current Commander of the Brooten American Legion. More than all of those lofty titles, Tensen is first and foremost a grandpa.

In Tensen's home in Brooten, two long rows of large, framed photos adorn the top of a piano. Framed in the photos are his grandchildren, Tensen's pride and joy.

"Most don't live that far away. Many are in either the Brooten area or Willmar," he said while explaining there are 15 altogether not counting one who passed away from an illness as a child.

In his golden years, Tensen takes in his share of local athletic events, especially at Belgrade-Brooten-Elrosa where a handful of his grandchildren are involved in multiple activities.

Beyond being grandpa and enjoying watching his grandchildren grow up, Tensen keeps busy with the Brooten American Legion and taking part in community events throughout the year.

Tensen was born and raised mostly in Iowa. At age 14, his family moved to the Belgrade area where his father purchased a farm.

Tensen's parents, the late Peter and Ann Tensen, took annual trips to the Bonanza Valley area to visit Ann's family, the Vander Beeks. By the start of his teenage years, Peter would size up dairy farms for sale in the area.

"Finally he found a farm with a big barn. That appealed to him. It was something we didn't have in Iowa. So we moved to our new farm located southwest of where Crow River Lutheran Church is located."

In Iowa, Tensen graduated from eighth grade prior to their move the next fall. By the time they had settled into their new farm, it was the first part of November.

"Dad told me, you can start high school now that we're all moved in. I told my dad there was no way I was gonna start school six weeks late. So that was the end of my formal education."