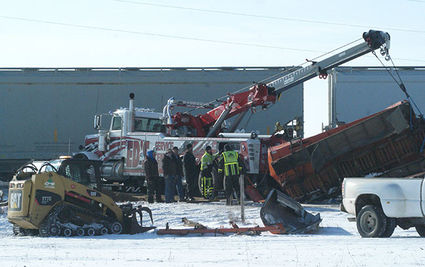 Ed's Service Center of Willmar responded to the accident and provided assistance with their big rigs in picking up the pieces of the snow plow and truck.

At approximately 08:45 on the morning of Wednesday, January 13, a snow plow collided with an eastbound train at the railroad crossing west of Brooten on 493rd Avenue. That intersection meets with Railway Avenue and also State Highway 55.

The snow plow was southbound on 493rd Avenue when it struck the train at the railroad crossing. Eyewitnesses said that the train "tore the snow plow apart" with parts flying into the snow-covered stubble of a nearby soybean field. The driver was injured in the accident but survived. He was taken by Glacial Ridge Ambulance to the hospital in Glenwood to be treated for his injuries.

It was reported that the driver was able to walk on his own power underneath the train car blocking the railroad crossing to get into the ambulance parked south of the train tracks.

A citizen living near the scene approximately 1,000 feet due east heard the loud crash when it took place. To illustrate the force of the train, once the train slammed on its brakes, rocks that comprise the bank surrounding each side of the train tracks flew eight to 10 feet into the ditch, as if God sneezed on them.

Further details, including the identity of the driver, will be posted after notification from law enforcement officials.

**Update on Thursday, the day after the accident: we have received the official report on the accident from Stearns County. Details are as follows.

On January 13, 2016 at approximately 8:51 a.m., the Stearns County Emergency Communications Center received a 911 call reporting that a snowplow had collided with a train at the railway crossing on 493rd Avenue in the city of Brooten. This roadway is the county line separating Stearns and Pope Counties.

Brooten Fire and Rescue, Brooten Ambulance and a Stearns County Sheriff’s Deputy were dispatched to the scene. Darin Pierce of rural New London (age 31, Pennock address) was operating a 1996 Ford Conventional Truck equipped with a front snow blade and side snow wing, loaded with sand and gravel. The vehicle is owned by Carlson Blading, who contracts with North Fork Township and the city of Brooten for their snow removal.

Pierce was southbound on 493rd Ave. and stopped at the railway intersection. Pierce proceeded into the intersection, failing to yield to the oncoming train and collided with an Eastbound Canadian Pacific locomotive that contained three employees and was pulling 109 railcars. Pierce was not wearing a seatbelt and was ejected out the front windshield. Pierce was transported to the Glacial Ridge Hospital in Glenwood by Brooten Ambulance and then later transported to the St. Cloud Hospital with non-life threatening injuries.

HD video from the accident scene. (Note: the plow is not a county plow, as it was stated in the video.)

The impact of the collision caused the front snow blade and the sandbox on the truck bed to be ripped away from the truck. The Canadian Pacific locomotive received damage to the front left side but was still operational. The second rail car, an empty tanker, received extensive external damage and was removed from the fleet. The collision shut down two intersections in Brooten for over three hours while this incident was investigated. Just a few minutes before 1 p.m., the train and railcars moved and continued on their eastbound journey.