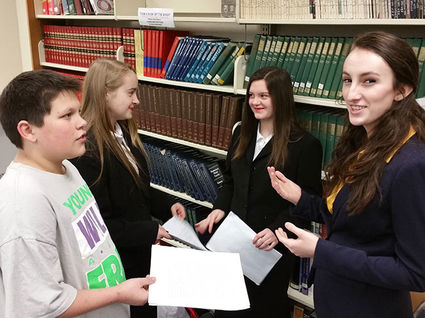 Prior to Saturday's mock meet, new speech students got advice from the veterans on the squad. Shown are first-year speechers along with one veteran (Tengwall). From left: Nick Lambert, Milly Hobbs, Kirsten Kampsen and Molly Tengwall.

The Belgrade-Brooten-Elrosa speech team has a storied history and has been a force among area schools this entire century.

Twice since 2012, B-B-E's state entrants in the Class 1A state speech meet have catapulted the team to a ranking of seventh based on their cumulative performances. They've been a top-10 ranked team in the state of Minnesota in 2012, 2014 and 2015.

Since 2000, 30 members of the B-B-E speech team have advanced and competed at the Class 1A state meet. Of those 30, 14 have earned individual section championships.

Last year's B-B-E team was certainly a veteran squad, with just four members being in speech for the first time. This year, roughly half of the team of 28 students are new to speech.

To read the full story, get a copy of the Jan. 21 issue of the Bonanza Valley Voice.

• April 9 - Section 5A meet at Annandale