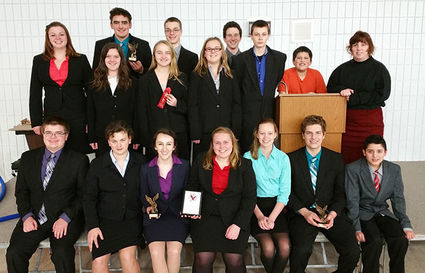 The B-B-E speech team is shown with their team trophy they brought home from the Eden Prairie meet on Jan. 30. They were very excited about their strong performances!

In a truly terrific and inspiring performance today at the 12th annual Eden Prairie Eagle Speech Invitational, the Belgrade-Brooten-Elrosa speech team took first place honors in the Class 1A division. Out of the 17 B-B-E students who competed in Eden Prairie, six advanced to the finals rounds and brought home hardware and ribbons.

"We are definitely very excited about the day in Eden Prairie," said head coach Lucy Lloyd.

"Our speech team showed tons of improvement from the same meet last year, when we had only a novice finalist and an honor finalist."

In the Top Finals, which brings the team the most points, Molly Tengwall took second place in Storytelling. Joe Reller and Riley Schumann placed third in the Top Finals of Duo Interpretation.

And last but not least, first-year speech team members Kirsten Kampsen and Milly Hobbs placed sixth in the Novice Finals of Duo Interp.

"Now we prepare for the Apple Valley meet. It's much bigger than either of our first two meets. At least five teams come to Apple Valley from other states. The Apple Valley speech team is just as much of a powerhouse as their wrestling and basketball programs."

Congratulations speech team!! We are all proud of you in Jaguar Country!

Note: this story will be further updated for the print edition of the Bonanza Valley Voice next week to include more detail on the Class 1A division and how the meet shook out for B-B-E's team.