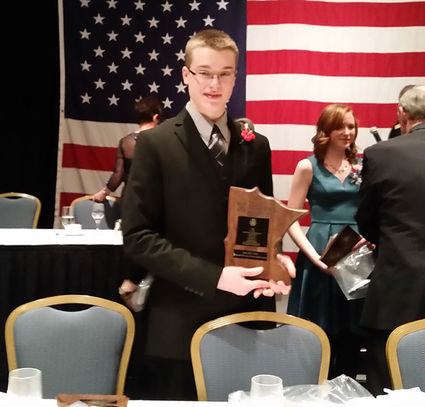 The Veterans of Foreign Wars and its Auxiliary, Department of Minnesota, held its 113th annual Grand Banquet Saturday evening, January 23, 2016 at the Minneapolis Marriot City Center, Minneapolis, MN. Nine students from throughout the state were in attendance having won first place in their respective district Voice of Democracy contests. Also in attendance was Rosemarie Miller, sponsored by Keep-Zimmer VFW Post and Auxiliary, who won the Patriot's Pen award.

The theme for this year's audio essay competition was "My Vision for America." It is designed to give high school students the opportunity to voice their opinions on their responsibility to our country and to convey their thoughts via the broadcasting media to all America.

Isaac Vliem, a junior at B-B-E High School, placed first in the sixth district competition thereby earning a trip to Minneapolis to compete at the state level.

Isaac placed fourth, receiving a $500.00 award. He is the son of Shawn and Heidi Vliem of Brooten and was sponsored locally by the Saboe-Leverson VFW Post 1825 and Auxiliary in Belgrade.

Great job, Isaac, from the Voice! We are proud of you!