Hailey Braegelman makes the mark as a junior 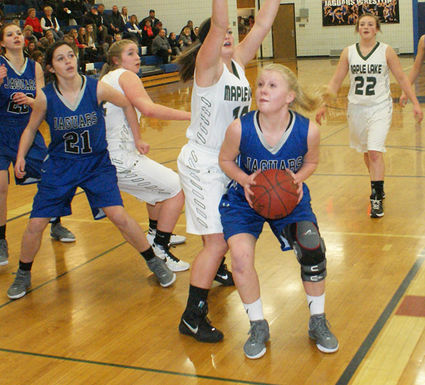 Hailey Braegelman has been a force on the basketball court since her eighth grade season at B-B-E.

Since her eighth grade season, Hailey Braegelman has been a force on the basketball court for the Belgrade-Brooten-Elrosa Jaguars. Now a junior, Braegelman has done something few high school athletes can in their careers: join the 1,000-point club.

Braegelman entered the home game against Maple Lake with 995 career points. She scored two field goals early in the first half, and at the 11-minute mark she hit a 10-footer in the lane against traffic to surpass the 1,000-point mark. The game was stopped to allow Mr. Gossen to honor her achievement.

For the game, Braegelman scored 18 points on 9-of-17 field goal shooting along with one assist, eight rebounds and five steals. The Jaguars defeated the Irish 70-60 to improve to 15-5 overall and 7-3 in the Central Minnesota Conference. They are one game out of second place behind Eden Valley-Watkins (11-7 overall), who the Jaguars host on Friday, Feb. 19.

Next for the Jaguars is a home CMC game and border battle on Monday, Feb. 15 against Paynesville Area.