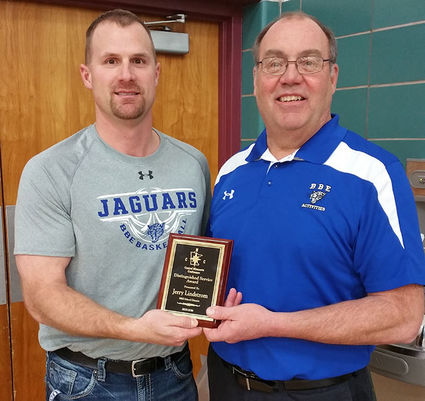 This year, Belgrade-Brooten-Elrosa has one recipient of the award.

He then served as head coach of Brooten Buccaneers football team, Brooten fastpitch softball and then B-B-E Jaguars fastpitch softball. He has also coached basketball at various levels along with junior high football before serving as the Activities Director position at B-B-E from 2006-2011.

The Aug. 26, 1976 issue of the Bonanza Valley Voice introduced Lindstrom to the Brooten community: "a native of Appleton, Mr. Lindstrom is a 1974 graduate of Concordia College-Moorhead with majors in social studies and physical education and health. The past two years he taught social studies at Grygla high school and was head football coach. Since Grygla was a new high school in 1974, Lindstrom started the football program there."

Lindstrom was head football coach from 1979 to 1984, and his latter three seasons Lindstrom was blessed with a high-flying quarterback, Mike Marthaler, who was also a 1,000-point scorer in basketball at BHS.

(HD video) Mr. Lindstrom is given the Distinguished Service Award.

Thirteen years after founding a football program at Grygla, Lindstrom founded the Brooten Buccaneers fastpitch softball team with the help of Brooten English teacher Bud Heidgerken. Two years later, in 1989, the program picked up talent from Belgrade high school when the B-B-E Jaguars were formed, and Lindstrom’s third fastpitch team went undefeated in the Prairie Conference while finishing as District 20 runners-up with a final record of 13-1.

It was a foretaste of things to come, as his fastpitch teams competed in numerous district championship games while earning multiple postseason trophies.

Lindstrom’s CMC award was recognized at halftime of Friday night’s boys’ basketball game, where current A.D. Rick Gossen gave him a plaque from the CMC.

“His willingness to help me and my role as Activities Director since 2011 is something I’ll never be able to repay,” said Gossen.

“He’s always been just a phone call away.”