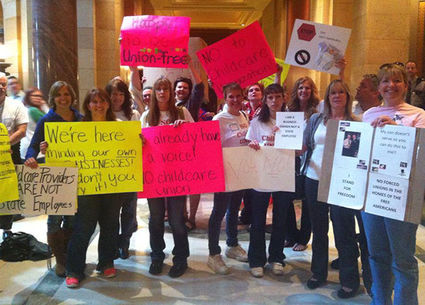 Ballots for a child-care unionization vote were mailed out last week by the state. Providers who cared for children receiving state child care assistance within the past year were supposed to be allowed to vote. However, it now appears that only those providers who received state payments in December were on the list of eligible voters. Ballots are due back to the Bureau of Mediation Services by the end of the month.

According to the legislative intent, nearly 2,400 providers should have been eligible to vote in the election, which has been controversial ever since the bill passed in 2013. With this new twist that only those who received payments in December are eligible, I'm not sure how many actual ballots were sent out. Even if all the original 2,400 had voted, that still represents only about one-third of all licensed child-care providers in Minnesota. In other states where similar legislation has been passed, low voter turnout has been a factor.

I have visited with very few providers in our district who are in favor of this unionization vote. It will, in all likelihood, raise costs for child care and result in those joining the union having to pay dues, which could run between $300 and $900 per year. If approved, AFSCME would be the bargaining unit. It doesn't appear as if these workers would be eligible for benefits such as state health insurance.

It took nearly three years to get the necessary number of signatures to require this vote. I don't see any benefit to having private businesses become part of a public employee union. The cost for all child care will probably increase, and it may have the unintended consequence of lowering the number of providers who will accept children with the state subsidy. We are already facing severe shortages in child care, especially for infant children. And I fear this is just adding to the problem of too many regulations placed on our providers.