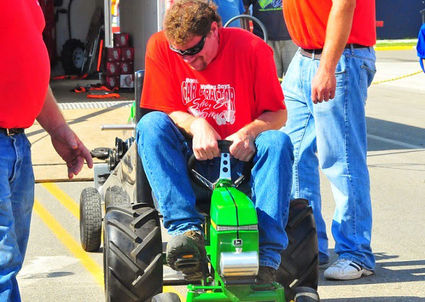 Rick Thonvold shown in the "adult" category of the pedal pull at Bonanza Valley Days on July 12, 2014.

Funeral services for Rick L. Thonvold, age 47 of Brooten, will be on Monday, March 7 at Hope Lutheran Church in Sunburg at 11 a.m. He was owner and co-owner of Brooten Auto with Scott Vogel since 1998, when the purchased the business from Charlie Baker. Rick has been an integral part of the Brooten business community while being a friend to everyone he knew throughout the Brooten and Sunburg communities and the surrounding area.

Arrangements are with Harvey Anderson Funeral Home in Willmar. A memorial page dedicated to Rick can be found here: http://www.hafh.org/sitemaker/memsol.cgi?user_id=1755606.

Rick was a member of the graduating class of 1987 of Brooten High School and also a part of the Brooten Buccaneers wrestling program on the B-squad when the varsity team won the Sub-Region 5C title with perhaps the most memorable and exciting win ever in the 28-year history of the program when they defeated Paynesville 24-22 in front of over 600 fans at the Brooten elementary school. (At regions, the Buccaneers lost to second-ranked St. Michael-Albertville, who won eight matches to four by Brooten with a final score of 39-17.)

While Rick wasn't on the varsity squad as a sophomore at BHS, he wrestled on both the B-squad and varsity team as a junior and then was a full-time starter as a senior for the Buccaneers. In Rick's junior year, he advanced to the Region V individual tournament along with Kris Presler, Brendan Bogart, Brett Bogart, Dain Hatlestad, Barry Fischer and Larry Norton.

During Rick's senior year, Brooten advanced to the Region V tournament as the Sub-Region 5C West champions. In the sub-region title match, the Buccaneers beat Kimball 32-24 with Rick winning by pin in just 92 seconds at 167 pounds. In the semifinals of Region V, St. Michael won 48-18. The Buccaneers continued their string of Prairie Conference championships in duals dating back to 1974-1975 with a 6-1 record in 1986-87. 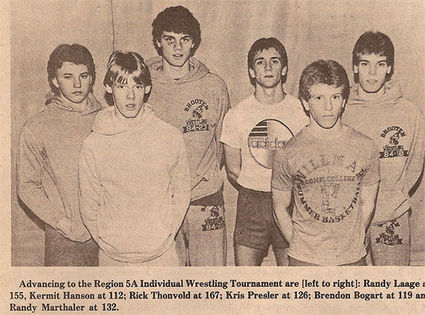 Rick Thonvold shown as a senior at Brooten High School with five other Buccaneers who qualified for the Region V wrestling tournament.

In the 1987 individual Sub-Region 5C West tournament, Rick placed fourth at 167 pounds to earn a trip to the Region V tournament. He was one of six Buccaneers to advance individually to regions along with Randy Laage (155), Kermit Hanson (112), Kris Presler (126), Brendon Bogart (119) and Randy Marthaler (132).

After high school, Rick attended the Willmar Community College for a Auto Parts Management degree. After college he began working at Big A Auto Store, which he later purchased with Scott Vogel.

As a business owner in the Brooten community, Rick was a strong supporter of the B-B-E Jaguars wrestling program and was seen matside at all home wrestling tournaments at B-B-E while helping run the clocks and scoreboards. He will be dearly missed in Brooten and also Jaguar Country.

May God bless his memory.