Another win for Schramel! 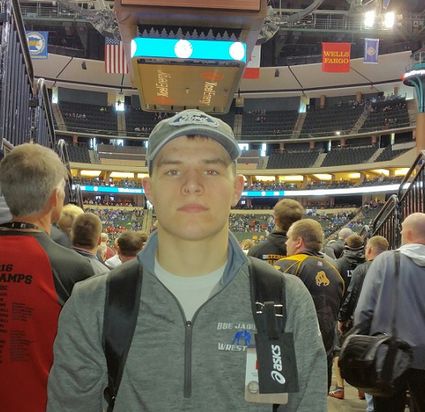 Colby Schramel outside the main floor of the arena at Xcel Energy Center on the first day of the individual state wrestling tournament.

Belgrade-Brooten-Elrosa's senior Colby Schramel has forged a 2-0 record in the early stages of the Class 1A individual state wrestling tournament after outstanding performances today at the Xcel Energy Center. (Friday, February 26)

(Video) It's an old video clip, from February 2014, but it features Colby Schramel wrestling at 132 pounds for a trip to the state tournament (the true-second match at sections). Schramel lost 11-2 to A-C-GC's Tyler Berghuis. Schramel is the wrestler in black in this video.

Against the state's top-seeded and second-ranked wrestler in his second match at state, Schramel trailed early but went on to win a 4-3 decision over senior Dietrich Balsbaugh (41-2) of Trinity School at River Ridge.

Head coach Jack Mueller said about Schramel's second win at the state tournament, "Colby was down in the match once again and kept fighting. He scored a takedown late in the match to go ahead 4-3. His success is proof that hard work does pay off. Both of his wins thus far are a combination of conditioning and heart. His opponent was the number one seed and defending state runner-up. Everything aside, there is still more work to do."

Mueller alluded to the fact that the B-B-E Jaguars have three guys who will compete on the second day of the tournament. All three are in the running for state medals, which is any wrestler's ultimate goal year in and year out.

Schramel (34-4) will wrestle in the Class 1A state semifinals some time after 10:45 a.m. at Xcel Energy Center. His opponent will be the fourth-ranked and fourth-seeded wrestler in the tournament, junior Bailee O'Reilly of Goodhue (39-4).