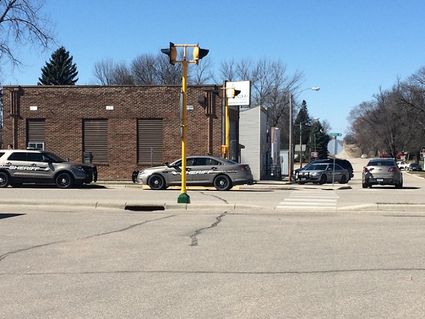 This photo was taken at 12:30 p.m. in Sunburg just outside the Lake Region State Bank.

Shortly before 12:10 p.m. on Thursday, March 24, an armed bank robbery took place at Lake Region Bank in Sunburg. By 12:20 p.m., four law enforcement officials had responded to the scene.

Kandiyohi County sheriff deputies were asking onlookers and those who were nearby the bank at the time of the robbery whether or not they have seen a blue minivan or full-size van.

No injuries were reported. An official news release by the Kandiyohi County Sheriff's Office has not been released yet.

This initial article was posted at 1:21 p.m., so check back later for more updates from the Bonanza Valley Voice. A video from the scene is forthcoming, but likely won't be posted until after 2 p.m.

(Video) Here's a video taken approximately one hour after the armed robbery took place in Sunburg.

**Update at 4 p.m. = Eyewitness reports gave the following information. The robber was a tall, slim male individual who was driving a dark blue minivan or fullsize van. His age is undetermined. The robbery took place closer to 12 p.m. Two members of the public were inside the bank at the time of the robbery but were not injured in any manner. The robber pulled out a small, black handgun. No shots were fired. Further information is being withheld as to not impede on the ongoing police investigation.

Furthermore, the Kandiyohi County Sheriff's Office released this description after reviewing security video from the bank: the male robber was wearing a dark-colored coat with a camouflage hat and a black mask. The 9-1-1 call came to their office just before noon. They have placed more information on their Facebook page.

This is the first bank robbery in Sunburg since December 6, 1980.