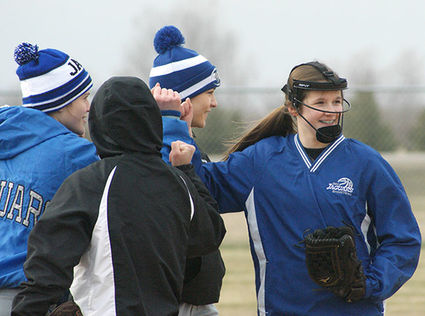 B-B-E's infield gathers with pitcher Cassandra Tensen as they get to work in Upsala's final at-bat.

A return to varsity action after a three-year hiatus was a success for the Belgrade-Brooten-Elrosa Jaguars fastpitch team.

On Tuesday (April 12) this week, the Jaguars hosted the Upsala Cardinals on the home diamond at the elementary school. Upsala had an early 3-2 lead before the Jaguars jumped ahead with leads of 5-3 and 9-6.

Shown is video from the Upsala game.

B-B-E had six fielding errors, while Upsala had four errors. The Jaguars out-hit the Cardinals by an 11-10 margin.

Next for the Jaguars is a home game on Thursday against Holdingford. It will also be the Central Minnesota Conference opener.

Read more on the game and see more action photos in this week's (April 14) issue of the Bonanza Valley Voice newspaper.