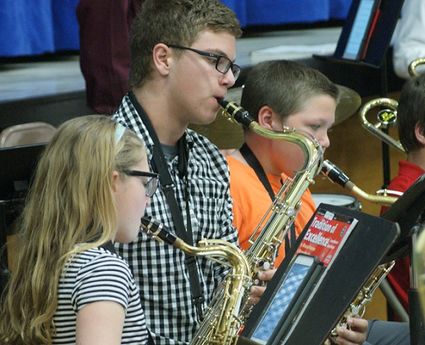 Shown are members of the fifth and sixth-grade Jazz Band performing on May 4 at the elementary spring concert.

On Wednesday, May 4, the B-B-E elementary fifth and sixth graders performed a band and choir concert. It featured the first public performances of the newly-formed fifth and sixth-grade Jazz Band.

(HD video) Featured in this video is the seventh and eighth grade choir singing on May 9 at B-B-E's high school spring concert.

On Monday, May 9, the B-B-E high school band and choirs gave their spring concerts. It featured the Jazz Band with fifth through 12th graders performing together.

More photos from both concerts appeared in the May 12 issue of the Bonanza Valley Voice newspaper. You can also view photos from the elementary spring concert at https://bonanzavalley.smugmug.com/BBE-Fine-Arts-2016/BBE-5th6th-Spring-Concert/.

Here's the link to the photo gallery from the high school concert: https://bonanzavalley.smugmug.com/BBE-Fine-Arts-2016/BBE-HS-Spring-Concert-509/.