A special day the Lord made for Ss. Peter and Paul Catholic church 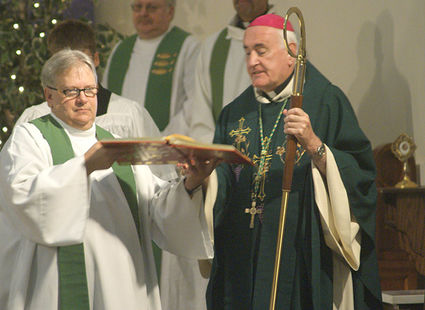 Bishop Kettler with the Book of the Gospels, handed to him by Father Kirchner.

Over 350 attended Mass at Saints Peter and Paul Catholic church on Sunday to celebrate the 125th anniversary of the church's founding. Past leaders of the church were present, as well as members of the Catholic clergy who call Elrosa their hometown: Abbott John Klassen and Father Joe Korf.

You can read the full story in the June 30 issue of the Bonanza Valley Voice newspaper, which includes a special center spread of color photos from Mass.

(Video) The choir sings during offering.

Extra copies of the June 23 and June 30 issues are available for purchase (75 cents each) at Bayer's Gas and Grocery store in Elrosa. If they run out, more will be provided! The Voice printed 200 extra copies just for sale in Elrosa.

Click here to view the 85-minute long video of Mass on June 26: http://citylinktv.com/archive/ss-peter-and-paul-125th-anniversary

And click here to view the Bonanza Valley Voice photo gallery with over 130 pictures from Mass on June 26: https://bonanzavalley.smugmug.com/2016-Bonanza-Valley-area-event/Celebrating-125-years-Ss-Peter