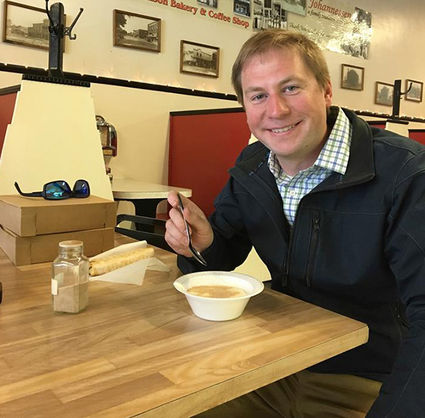 Andrew Falk enjoying a meal of Rømmegrøt at the Benson Bakery on Syttende Mai, May 17, 2016.

Letter to the editor,

There was talk and promises about re-opening the Appleton Prison during the last legislative session. Failure was always blamed on other parties. Yes, some people were upset about expanding prison beds, but the heavier opposition that I heard about from lawmakers in St. Paul was the very questionable economics.

The proposal to lease the PCF from CCA was estimated at between $6 and $8 million per year. This only accounts for the dollars paid to CCA, not the operations costs. The current tax-assessed value is $14.75 million dollars. Why would the state of Minnesota pay more for a lease than a facility is currently worth? For basically the cost of a two-year lease, we taxpayers could own it! Lawmakers and the governor answer to all Minnesota taxpayers. Would you want your legislator in St. Paul to vote for this deal if the prison was in Minneapolis?

CCA has offered to sell the facility for $99 million. They must think we are suckers!  Why should we as taxpayers pay approximately 6.7 times the assessed valuation? Remember, CCA sued us (Swift county taxpayers) just a few years ago, and threatened us with another lawsuit in tax court, to drive the current valuation down to $14.75 million. As Swift county residents, we are all paying more so CCA could pay less. For tax purposes, they say it's worth $14.75 million and for sale it's worth $99 million? Huh?

Here is my proposal, and if I am fortunate enough to be re-elected to the MN House, this will be the first bill I author.  Minnesota should purchase the PCF for the current 2016 assessed value ($14,750,000), and convert it into primarily a mental health, chemical dependency, and jobs training facility for the state.  Governor Dayton has stated that mental health services are a key issue in the next session, and the Senate would be more inclined to support this type of proposal.

Jail beds should be only a portion of the proposed usage. The state is set on a course of reducing prison bed needs.  The current needs estimate (500 beds) would never put the PCF back to the staff of about 350. Projections of more inmate beds needed are just that-guesses.

By purchasing PCF and converting it also to a treatment and training entity, not simply a jail, we could:

·      Create a higher trained, better paid workforce for an upgraded facility in Appleton;

·      Provide job skills and training to our rural workforce;

·      Avoid lease payments and opposition by owning PCF outright; and

While the language to lease the PCF did pass the House of Representatives last session, the actual bill did not. The language was amended onto an omnibus bill and immediately jettisoned in conference committee.

I believe my proposal to purchase has a much more realistic chance. It would get good, maybe better, jobs back, and we would save money as taxpayers.

Andrew Falk is a former state representative who is running for his old seat in the Minnesota House of Representatives. He is a farmer in the Sunburg/Murdock area.