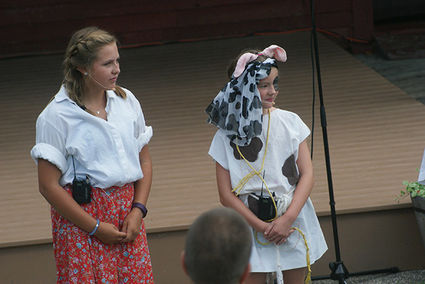 Bridget Doyle (played by Greta Reichmann) on the left, and the cow (played by Lyla Stadtherr) on the right.

Shown is a 16-minute video clip from the second half of last Thursday's (July 21) children's theater musical in Terrace called "Once upon a Leprechaun" at the historic Terrace Mill. The musical, which was held two nights in Terrace, was co-directed by Julie Lloyd and Lucy Lloyd. The musical is from the book written by Patrick Rainville Dorn. Music and lyrics credit goes to Bill Francoeur.

The musical's synopsis is as follows:

Get whisked away by the music and spirit of the Emerald Isle in three hilarious and action-packed Irish folk tales! When a trio of wild and crazy leprechauns try to help tongue-tied shepherd Fin O'Grady learn to tell a story, they help him win the hand of his one true love. Assisted by the wee folk of Ireland, Blather, Blarney and Balderdash enact "The Hunchback of Knockgrafton," in which a simple man's gentle nature wins him an unexpected prize and a cruel counterpart learns that it's not a good idea to mess with little people. In "The Griffin's Feather," young Aidan bravely encounters a sneezing girl, a frenzied farmer and a bombastic boatman before snatching three feathers from a hen-pecked griffin in order to cure a sleeping beauty. In "The Bird, the Mouse and the Cricket," a courageous lass and three magical animals risk their necks to help a sour prince regain his lost laughter. At last, the shy Fin discovers that a story is a treasure that increases the more you share it. He thanks his lucky charms that he came upon the leprechauns! This uplifting, comic musical glitters like a gem with its peaceful Celtic melodies, clever dialogue, and slapstick humor to inspire many a chuckle in the wee as well as the old!

Photos and extra coverage of the musical will appear in the July 28 issue of the Bonanza Valley Voice newspaper.

Copy and paste this link into a web browser to view the Bonanza Valley Voice photo gallery: https://bonanzavalley.smugmug.com/organize/BBE-Fine-Arts-2016/Once-Upon-a-Leprechaun-at-Terr