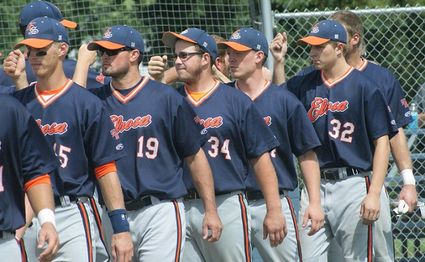 The Elrosa Saints are heading to regions again!

The Elrosa Saints amateur baseball team earned a spot in the Region 15C tournament with a 2-0 win today (July 30) over New Munich. The Silverstreaks had defeated Elrosa twice in the regular season series, winning 4-2 on May 15 in New Munich and then by a 2-0 score last Sunday (July 24) in Elrosa. Defensive errors by the Saints contributed to both losses, something they knew they had to clean up in order to punch a ticket to regions.

(HD video) Action from the July 8 meeting in Elrosa with Spring Hill from the bottom of the fifth inning.

In the first meeting, Austin Imdieke and Austen Hadley pitched for Elrosa. In last Sunday's meeting, Ethan Vogt started and Hadley closed. Today Ethan Vogt pitched a complete game (seven strikeouts, six hits) for the Navy and Orange at New Munich and had a solo home run to boot! New Munich's Ty Reller was also terrific on the mound, giving up just three hits to go with nine strikeouts in a complete-game effort.

Elrosa scored first in the second inning when Cody Eichers made home on an error. Ethan Vogt's home run came in the seventh inning.

**Spread the word Saints fans! Elrosa hosts the Stearns County League North division championship game at 12 p.m. noon on Sunday, July 31. They will play No. 4-seeded Meire Grove, who upset the No. 1-seeded Spring Hill Chargers by an 8-7 score in today's other division opener.

Here is the report from the SCL-South playoffs:

St. Martin beat Richmond 3-2, while Farming handed Lake Henry a 4-1 loss. In Sunday's games, St. Martin plays at Farming in the division championship at noon. Lake Henry plays at Richmond with a 2:30 p.m. start time in an elimination game.