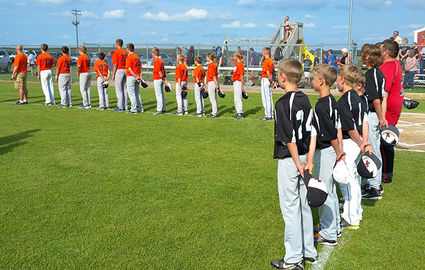 The Elrosa Saints and Regal Eagles Little Dipper baseball players line up at attention for the National Anthem prior to playing one another for the league championship on July 31 at Regal's Little League field.

Shown is a video of player introductions and also the National Anthem prior to the championship game of the Stearns County League Little Dipper teams from Regal and Elrosa. Members of the Lake Henry Legion were on hand and provided a U.S. Flag and American Legion Color Guard.

Read the August 4 issue of the Bonanza Valley Voice for a story on the game and also a team photo of the champions.

NOTE: an online photo gallery will be uploaded as soon as possible that includes game photos.

(Video) The National Anthem played after the player introductions on July 31 in Regal.