Region title contest goes down to the wire

Two baseball goliaths slug it out in Region 15C championship 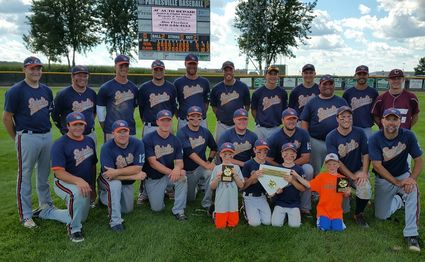 The Elrosa Saints baseball team gathers with their region championship trophy in center field at Paynesville following their win over Regal.

Strictly from a baseball fan's viewpoint, the game that played out between Elrosa and Regal could not have been scripted any better. In the Region 15C amateur baseball tournament finals, the Saints and Eagles went at it for nine stellar innings of baseball on Sunday, August 14 in Paynesville. With fans chanting, shouting and cheering from start to finish, Regal had the upper hand early with a 2-0 first inning lead.

The Saints got one run back in the second inning and took a 3-2 lead in the bottom of the fourth. The Eagles tied it at 3-3 in the fifth and scored once more in the sixth to go up 4-3. A two-run seventh inning gave Regal a 6-3 lead, and the outlook was bleak in the bottom of the eighth after Elrosa had two ground balls get them down to their final four outs.

Cody Eichers singled and was joined by Matt Schmitz crossing home after Schmitz knocked a home run over the left field fence in the eighth to narrow the gap to one run.

A dramatic ninth inning was set up with the Saints scoring two runs on a bloop infield single by Austen Hadley. The ball chopped off his bat, bounced high one time and was fielded by Eagles third baseman Josh Beier. He threw to first baseman Nathan Beier, who got the tag down on a hard-charging Hadley who dove head first into the base. A bang, bang play, the umpire called Hadley safe on a would-be slide under the tag as his hands reached the base. Fans can watch the video below, which is inconclusive, and see it all play out.

Elrosa's Brady Weller, who pitched the final three innings, earned the win. Jonah Johnson, draftee from Norway Lake-Sunburg, was charged with the loss. More game statistics will be published in the upcoming issue of the Bonanza Valley Voice newspaper.

Final score: Elrosa 7, Regal 6. Earlier in the day, Elrosa beat St. Martin in the elimination final game by a 6-2 score. St. Martin is the No. 3 seed to the state tournament from Region 15C; they last played at state in 2014. The Martins beat Farming 8-3 on Saturday night to get into the elimination bracket final. The Flames advance to state as the No. 4 seed from the region; this is their first state trip since 2002.

*Update: Elrosa drafted Ty Reller of New Munich and Matt Imdieke from Meire Grove to add to their pitching battery for the state tournament.

The Elrosa Saints (18-14 overall) advance to state for the first time since 2013 and are the No. 1 seed from Region 15C for the first time since 2002. They get a first-round bye and will play in the field of 32 at the Class C state tournament with a 5 p.m. game on Saturday, August 27 in Hutchinson. Their opponent won't be determined until the first round of the state tournament begins. The Saints will play either the runner-up of Region 4 or the No. 3 seed out of Region 1. Those two teams play at 12 p.m. on Sunday, August 21 at a site to be determined. *Update: in their state opener the Saints will face either Blue Earth (Region 4 runners-up) or St. Joseph (Region 1 third-place team). Blue Earth and St. Joseph meet in the first round of the state tournament in Hutchinson on Sunday, August 21 at 12 p.m.

(HD video) This eight-plus minute long video shows part of the bottom of the ninth inning play out. The "bang, bang" play that ended the game comes after the seven-minute mark with Austen Hadley batting.

The 2016 Class C amateur baseball tournament will be hosted by Hutchinson, Dassel and Litchfield. This is the first year in the history of Minnesota amateur baseball that three sites are penciled in for use for the tournament. In recent years, two sites are used for all games with a third town picked as a back-up site.

*Publishing notice: currently B-B-E and Elrosa-area businesses are signing up for special extended coverage and a color photo spread for the Saints baseball team in the upcoming August 18 issue of the Bonanza Valley Voice. We are hoping to get to 20 businesses and have already gotten eight signed up. Later tonight the "drawing board" will dream up an idea of what this coverage will look like in the newspaper. It will include a large number of action photos of Regal Eagles players, many of whom are Belgrade-Brooten-Elrosa school graduates and former Jaguar baseball players.