State tournament updates are below 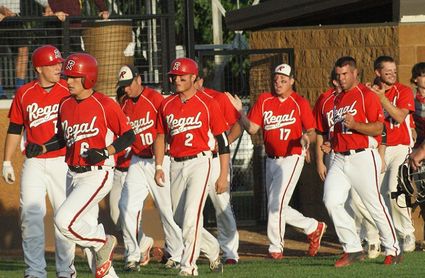 The Regal Eagles advance to the Round of 32 at the Class C amateur baseball tournament.

The Regal Eagles have won their state tournament opener, just as they did back in 1997 in their last trip to the big show in Minnesota's Class C of amateur baseball.

The Eagles, facing the the Shakopee Coyotes in Dassel this morning (August 20), sat in a 2-2 tie through nine innings. Chris Beier started and went seven innings. Brian Kingery, Atwater draftee, finished for Regal and earned the pitching win.

In the bottom of the 12th a two-run, two-out home run by Nathan Meyer ended the game in favor of Regal by a 4-2 score. His bomb, into the wind no less, sailed over the 380-foot mark at Saints Field in Dassel. Meyer finished the game with a single, two doubles and the game-winning home run.

Next for the Regal Eagles: in the round of 32 at state, Regal (22-9 overall) will play on Saturday, August 27 in Hutchinson at 1:30 p.m. against Hadley, a town out of southwest Minnesota.

By clicking on the following link, you can read archived stories on the Hadley Buttermakers at the Worthington Globe newspaper's website: http://www.dglobe.com/taxonomy/term/62018. Hadley competed at the state tournament in 2015 as the No. 3 seed out of Region 13. They lost the state opener 3-2 to Belle Plaine after trailing 3-0 through five innings.

(HD video) Elrosa's Ethan Vogt squares off against Regal's Chris Beier in the August 12 match up between the top two teams in Region 15C.

In the second game at the state tournament involving teams from Region 15C...the Farming Flames played a terrific game against Foley but game up short in the final innings. Foley led 2-0 through six innings, but in the top of the seventh the Flames tied it at 2-2. Foley went ahead 3-2 in the bottom of the seventh on a wild pitch. Aaron Nett scored the tying run at 3-3 in the top of the eighth on a single and an error. Farming then took a 4-3 lead on Mitchel Thielen's RBI-single to left-center field. In the bottom of the eighth, starter Brad Mergen was relieved by Roscoe draftee Jordan Roos. Foley scored three runs in this at bat on three hits, mostly aided by three Farming errors. Their 6-4 lead stood through the end of the game. Foley advances to play Watkins in the Round of 32 next weekend.

St. Martin extended their season with an exciting 4-3 win over Montgomery in their state tournament opener. They led 2-0 after three innings and won in spite of three errors in the field. The Mallards tied it in the bottom of the third inning and took a 3-2 lead on an unearned run in the sixth. The Martins tied it on a run by Austin Arceneau in the bottom of the seventh, and Kyle Lieser scored the game-winner on an RBI-single by Bryan Schlangen. Next for St. Martin at the state tournament: the Bemidji Blue Ox at 11 a.m. on Sunday, August 28 at Dassel.