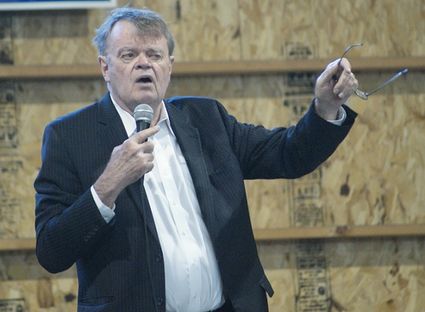 Garrison Keillor during one of his many montages at the Jim Falk farm on October 9.

Just beyond the outskirts of the Bonanza Valley and a hop, skip and a jump from the setting of the fictional Lake Wobegon community that forms the basis for his weekly stories, American author, storyteller, humorist, radio actor, voice actor and radio personality Garrison Keillor spoke for over an hour at the Senate District DFL fundraiser on the Jim and Karen Falk farm in rural Sunburg/Murdock.

Keillor, a fixture on Minnesota Public Radio's Prairie Home Companion show each weekend, was right at home in the pole barn setting in front of a packed crowd while he re-booted his role as down-to-earth storyteller and singer on Sunday, October 9. The fundraiser's main purpose was to promote the Democratic-Farmer-Labor candidates of Senate District 17, including Andrew Falk, Mary Sawatzky and incumbent Senator Lyle Koenen. Keillor's performance lasted about one hour and 10 minutes, after which he spent over an hour mingling with the crowd, taking pictures and giving autographs to fans and well-wishers.

The video embedded here has all of his speech except the first couple of minutes. It can be viewed in moderate-quality HD by adjusting the YouTube settings in your video player.

*Note: Once the Bonanza Valley Voice learned of this event and of Keillor's attendance, we immediately reached out to local Republicans to ask for dates and locations of any large Republican gatherings and fundraisers taking place in October across central Minnesota. Coverage of such events will take place as our news room's schedule allows. If anyone hears of a DFL or Republican rally of any sort, please e-mail the information as soon as possible to the Bonanza Valley Voice: bonanzavalvoice@tds.net.