The Jaguars didn't know what hit them 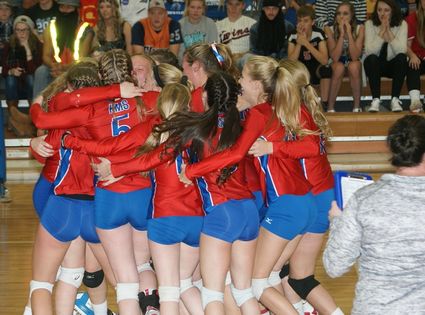 The Fighting Saints gather in a huge mob at mid-court after they won their second playoff match in a row in the sub-section playoffs.

They certainly did not see that coming. What transpired was something that hasn't happened since 1998. (More on that at further below).

The high-flying, hard-swinging offense for the Belgrade-Brooten-Elrosa Jaguars volleyball team never got off the ground as they went down in a shocking first-round playoff defeat at the hands of the Kerkhoven-Murdock-Sunburg Fighting Saints on Friday night, October 28. The Jaguars got off to good starts in all three games, but the Fighting Saints answered back quickly in each set and had the home team down for the count by the time game three got underway.

Game one started out to form with Sarah Feely and Ally Gruber getting two early kills. A kill by Katherine Mastey gave the Jaguars a 4-2 lead. Then K-M-S got a kill, and the game was tied early at 4-4 after B-B-E hit into the net. It was the first of five points they gave the Fighting Saints in game one by that unforced error. Mastey and Jordyn Steffensen each had kills, with Morgan Gronli tipping for a 7-7 tie game. Feely's kill made it 8-8, but the Jaguars hit twice into the net back-to-back to go down 10-8. Mastey then hit a tip kill for a 12-11 lead, the last time the Jaguars had the upper hand in game one. B-B-E committed five straight errors to go down 17-12 by hitting out of bounds, a net violation and then hitting into the net. Coach Kevin Weller burned both timeouts as the Jaguars took a turn for the worse. Out of the second timeout, K-M-S got a kill for a formidable 21-13 lead. By that point the look on the faces of the K-M-S players changed as they realized they were not only playing with the top-seeded Jaguars but they were in fact beating them. The adrenaline may have caught up with K-M-S as they rattled off four errors of their own to narrow their lead to 22-18. Two B-B-E errors down the stretch ultimately cost them a chance at a comeback, and fittingly, the Jaguars hit into the net to hand K-M-S a 25-20 win.

Game two started out in similar fashion, with the Jaguars jumping ahead 4-1 out of the break. Two kills by Mastey kept the Jaguars ahead, but K-M-S slowly chipped away and tied it at 7-7 and then gained their first lead with an ace serve that hit the top of the net and dropped over on the B-B-E court. K-M-S's 5-0 run put them ahead 10-7 to force Coach Weller to burn his first timeout. Kills from Gronli and Gruber and a K-M-S error tied it at 12-12. After a 14-14 tie, the Fighting Saints surged ahead 21-15. B-B-E narrowed it to two points on a kill from Mastey and an ace serve from Karsee Kampsen. K-M-S got an ace serve combined with three B-B-E errors to earn another 25-20 win and put a mountain's worth of pressure on the Jaguars.

The Fighting Saints had two early errors in game three, but they turned it around quickly and got a kill and an ace serve to tie it at 2-2. From that point on they poked and prodded the Jaguars and dropped the hammer once again while jumping out to leads of 8-4 and 11-7. Two service errors helped B-B-E cut it down to 12-9, but K-M-S got a kill and was off to the races while senior Samantha Gjerde served her team out to an 18-9 lead on a 6-0 run. It proved to be the straw that broke the camel's back, as the Jaguars folded down the stretch. Trailing 22-13, the Jaguars handed K-M-S the final three points they needed to advance to the semifinals by serving out of bounds, digging a hit and sending it towards the K-M-S players bench and finally stepping into the net to end the match and their season. Game three: K-M-S 25, B-B-E 14.

In the end, B-B-E had no answer for senior outside hitter Tori Everson, who battered B-B-E's back row all night and tallied 15 kills to go with four ace serves, two blocks and 10 digs. K-M-S also thwarted the Jaguars offense with five blocks compared to B-B-E's two ace blocks (Kendra Schmitz and Katherine Mastey).

The calendars said 1998 the last time the B-B-E Jaguars failed to advance out of the first round of playoffs. As the saying goes, all good things must come to an end, and tonight was a prime example of that.

K-M-S (12-17 overall), seeded No. 4 in Sub-Section 5A-West-A, advances to the semifinal round where they will face No. 2-seeded Browerville/Eagle Valley at Long Prairie-Grey Eagle high school on Tuesday, November 1 at approximately 7:30 p.m. The incredible win came just 24 hours after they beat Atwater-Cosmos-Grove City 3-1 in the play-in round at Kerkhoven.

*Note: making the win even more historic was the fact that it was K-M-S's first win in the quarterfinal round since 2008. That year K-M-S advanced all the way to the sub-section finals before losing a heartbreaker 3-2 to Minneota and finishing 19-9-2 overall.

(HD video) The Fighting Saints take out the Jaguars in three games, with video here shown from the end of the match.

Below, watch video from the end of game three. The YouTube player can be adjusted to HD.