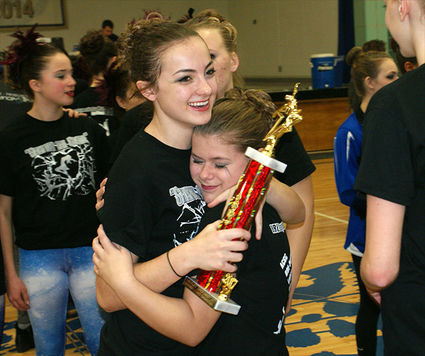 Grace Patock and Paige Benson hug one another in celebration of their JV Jazz team's third-place finish at the home invitational on January 9.

The B-B-E/Paynesville dance team competed in four divisions, and the JV Jazz team came away with the third-place trophy in a division with eight teams.

Shown in the video below are Courtney Brandt and Megan Carroll singing the National Anthem at the beginning of the dance meet. Further coverage and a host of photos will appear in the January 12 issue of the Bonanza Valley Voice newspaper.

(HD video) The National Anthem sung on January 9 at the home dance invitational.