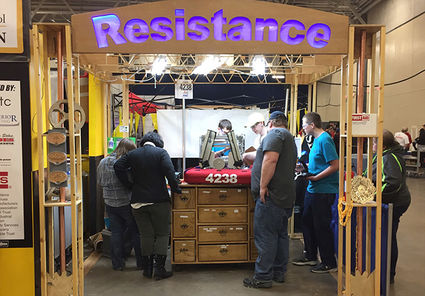 B-B-E's robotics team is shown setting up their booth at the D.E.C.C. in Duluth on Thursday, March 2.

The Belgrade-Brooten-Elrosa robotics team is preparing for the two-day Lake Superior regional competition held at Duluth on Friday and Saturday, March 3-4. The team arrived in Duluth on Wednesday night and spent the day Thursday preparing their robot for the F.I.R.S.T. competition, which runs Friday and Saturday. B-B-E's team is one of 123 teams taking part in two regional competitions at the Duluth Entertainment and Convention Center.

The F.I.R.S.T. competition combines the excitement of sport with the rigors of science and technology. Another way to think about it is the "ultimate sport for the mind".

B-B-E robotics coach Tom Gjerstad said in an update on Thursday afternoon, "We are nearly done getting our robot assembled after the trip north. We had a loose wire under shrink tubing that took forever to locate. Once we found it, it was fixed in short order by the team. We've received many really great comments about how nice our booth is, and we've heard from passers-by that they like our robot design."

Further updates will be posted on Friday afternoon, March 3.