Jaguar wrestlers battle at Section 5A 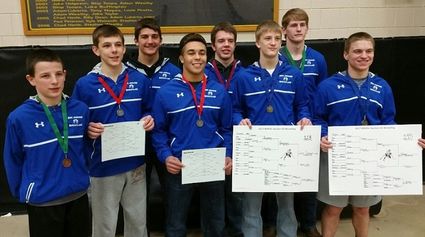 The Belgrade-Brooten-Elrosa Jaguars wrestling team competed at the Section 5A individual tournament on February 24 and 25 at New London-Spicer high school. The Jaguars filled 13 of 14 weight brackets, missing just the 220-pound division. Of the 13 wrestlers who started the tournament on Friday, 11 made it to the second day of action in wrestlebacks or semifinals.

Heading to state for B-B-E are Canon Swanson, Tyler Bents, Isaiah Gilbert and Adam Jaeger. This will be Bents' third trip to the state tournament, second for Swanson, second for Jaeger and first for Gilbert. All four are underclassmen.

The Class 1A state wrestling individual tournament begins at 9 a.m. on Friday, March 3 at the Xcel Energy Center in St. Paul. Canon Swanson will be on the mat at 9 a.m. ready to rumble in the 113-pound bracket that morning, followed by Tyler Bents (126), Adam Jaeger (145) and Isaiah Gilbert (152).

Full updates on the brackets will be released as soon as they are announced by the Minnesota State High School League. Also, read more on the Jaguars in the next issue of the Bonanza Valley Voice newspaper!! The February 23 issue had many photos and a feature story from the Section Final Four, and photo galleries will be posted this weekend as well. To view sports photos, click on the "photos" tab on this website.