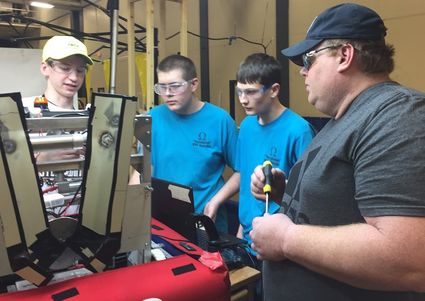 Tyler Lee and Aspen Peterson (center) get help from a nearby team's member while parent mentor Tom Lee assists.

The F.I.R.S.T. competition, held at the Duluth Entertainment and Convention Center, runs two days, March 3 and March 4. After arriving in Duluth on Wednesday and spending the day Thursday assembling their booth and robot, B-B-E Team Resistance jumped into battle on Friday and forged their way to the middle of the pack of 63 teams. Overall the D.E.C.C. has 123 robotics teams this weekend, with a second regional also underway, the Northern Lights region.

"Some teams in the Lake Superior region have over 100 students on them. B-B-E's team? Well, we have six students and one guest student," said Coach Tom Gjerstad after the first day was a wrap.

In addition to Gjerstad, parent mentors Tom Lee and Rachelle Stephani are also helping out the team.

When the first day scores were tabulated, B-B-E Team Resistance sat in 38th place out of 63 teams with 887 match points and a head-to-head record against other teams of 3-3.

One team, Walker-Hackensack-Akeley, has a perfect 6-0 record in head-to-head match-ups. Other teams with 3-3 records are from Upsala, Nevis, Cambridge, Rothsay, Pequot Lakes, Minneota, Nashwauk, Grand Marais and Appleton WI (population 73,596).

"We were as high as 34th today. We scored 100 percent on programming. Our robot's gear placement was one of the best, but we had trouble climbing as we can't get the belt tight enough. The team was very happy once the competition got going and the robot got into the action. It was really neat once we saw our team get points on the board."

Gjerstad noted that many other teams were unable to get their robot to climb, and many of them climbed too fast and powered out.

"I am so proud of my kids. They put their heart and soul into that robot," he added. 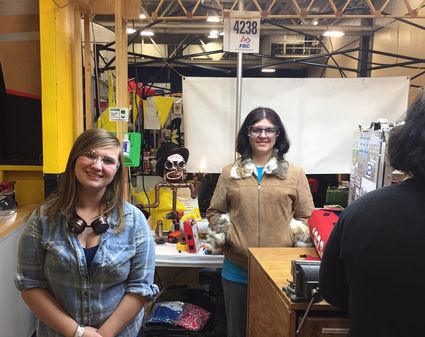 Sonja Carson and Celeste Stephani were excited to get the competition underway for Day One of the Lake Superior regional in Duluth.

Live-streaming from Duluth can be accessed at the following link (copy & paste into new browser): http://www.firstinspires.org/robotics/frc/2017-twitch-streams.