Speech Showcase is Monday - the public is invited and encouraged to attend! 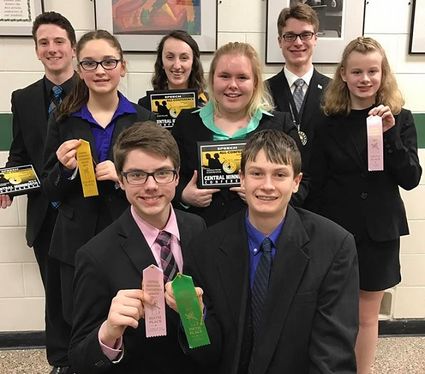 Top-six finishers for B-B-E at the 2017 Central Minnesota Conference meet.

The Belgrade-Brooten-Elrosa speech team turned in one of their best performances of the season at today's Central Minnesota Conference meet (March 23). Led by three seniors who brought home categorical conference titles, B-B-E took second place ahead of host Maple Lake.

A very large and talented Eden Valley-Watkins squad emerged as champions for the third straight year. B-B-E was also CMC runners-up in 2015 and 2016.

For B-B-E, the second-place finish continues a truly incredible run of success in the CMC, where they have finished third place or better every year since first winning the CMC title in 2006.

Fourth-place finishes were earned by first-year speech team members Jayden Miller (extemp. speaking) and Aynsley Preble (extemp. reading). Miller is a junior on the team, while Preble is a seventh grader.

The B-B-E speech team has a one-day break in action as the school is about to wrap up their third quarter on the academic schedule on Friday, March 24. On Saturday, the speech team travels to Melrose for the last regular season meet. The Bonanza Valley Voice will also be at the Melrose meet and looks forward to providing extended coverage on the team as they prepare for the final stretch of the 2017 season. Look for more coverage in the March 30 issue of the Bonanza Valley Voice. The March 23 issue included a short Q & A on one of the many seventh-grade members on the team.

Next week, the speech team invites the public to their annual Spring Showcase event at the B-B-E high school on Monday, March 27 at 5:30 p.m. in the auditorium. Parents, friends, family and others can get an up-close look at the talents of each member of the team as they tune up for the postseason. After their showcase night, the speech team travels to Morris on Friday, March 31 for the sub-section meet.