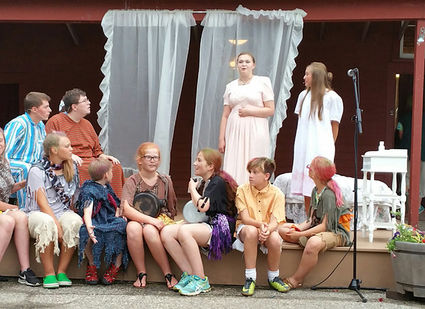 Shown is a scene from the opening night of 'Peter Pan' in Terrace on July 19.

The night could not have worked out better for the opening show of 'Peter Pan' by the Terrace Mill Children's Theater group. Over 200 were in attendance to watch 35 young thespians put on a terrific showing of the musical. Check out some of the photos and video attached. Spread the word to get everyone in your neighborhood to attend the final show, tonight, Thursday, July 20, at 6:30 p.m. in Terrace. Co-directors are Julie and Lucy Lloyd, with Lucy Lloyd also playing the role of the pirate Smee.

(HD video) Shown is the opening minutes of the musical in Terrace on July 19.

The show was dedicated to Ethel Anderson, who passed away on March 27, 2017. She was a tireless volunteer at the Terrace Mill and the No. 1 fan for the Terrace Mill Children's Theater. Over the past 18 years, she never missed a performance, even in summers when they put on two separate shows. Anderson, who lived on Lake Linka in rural Glenwood, attended in every show, both nights, for 16 years until moving to a care facility in Golden Valley.

Said Julie Lloyd, "Ethel was always moved and inspired by the kids. She tearfully expressed how good the show was and how wonderful the kids were. Although her own grandchildren never participated, she was as proud of our kids as if they were hers."

Please come out tonight (July 20) and support the arts!

Note: the photo stream can't be viewed with the Google Chrome browser.